Can't find an official channel for customer feedback so I'll post here in the hopes that it will be passed onto the dev team.

Professional Network IT consultant by trade, having worked with Sonicwalls for over 10 years. I've deployed a half dozen Gen 7 Firewalls of a variety of difference models now and I have feedback regarding how it's gone.

First of all I want to say that switching to the Gen 7 interface has actually been a pretty good process so far. I appreciate that a lot of care was put into making it very similar to the old interface so it took very little time to get up to speed on the new version. Usually when a company puts out a new UI they change things for the sake of changing things and it's really irritating for those of us that have been using it forever, so thanks for keeping all the functions and buttons in generally the same places despite the graphical uplift. That's saved us a lot of time in training and re-learning

In particular I want to pass on a message from my Junior tech. His experience has been on Palo, Cisco, Sophos, and Fortinet and I'm won him over to Sonicwall with little effort. In particular he's been very impressed at how quickly he learned the interface and commented that it takes significantly less clicks and configuration to get even complex Firewall configs going. Configuring Sonicwalls is noticeably faster, and saves our customers between 1-2 hours of consulting time on average to get everything configured and going.

I've experienced a fair number of bugs in the earlier firmware including an unstable UI that kicks you back to the login page, and a really bad issue with the SSL VPN service that crashes every 24 hours requiring a reboot... but thankfully the bug fix patches were released promptly (in my experience) and those issues were quickly resolved.

We also had a strange issue where apparently Canada has a specific skus for Wireless TZ Sonicwalls now? We had to RMA several units because they weren't compatible with Canadian wifi regulations and this caught our Sonicwall reps off guard as well, apparently this wasn't well communicated. This delayed one of our deployments by 2 weeks.

The new UI does seem to lag a fair bit compared to the old one. I'm frequently finding myself staring at a loading wheel for 5-20 seconds when opening up settings. The loading wheel will often pop up, disappear, and then re-appear again. JUST LET ME CLICK ON SOMETHING! It also seems pretty random, one click will open almost immediately and later on opening the same thing takes up to 20 seconds... All that loading time adds up and leads to frustration, let alone slowing down the configuration and troubleshooting process.

In the objects menu for example if search and then try to edit multiple objects I'll complete one, and it will reload the screen displaying all objects, pause, and then reload again but this time with my search filter applied. Seems like inefficient code in the back end.

The NAT objects page seems to have taken inspiration from Palo Alto with multiple tabs for the NAT rules. It was better when it was all one long menu like in v6. A lot less clicking back and forth required to setup a NAT rule.

The best feature is the 'classic' menu option that turns the GUI off what I call 'noob mode' and displays all the options on the left in an easy to read manner. This should be the default, is there a setting to make it the default? If there isn't there should be.

Also why is the default admin timeout for the login at 5 minutes? With all the lag in the interface I've made it a habit to immediately crank this up to 15 minutes on every new device otherwise I find myself opening another window to work on something else while the Sonicwall page loads and then by the time I click back I've already timed-out and I have to log in again... and wait a good minute for the login process to finish.

The boot time is also excessively long... on older models I could upgrade the firmware and reboot in minutes, but the upgrade and bootup time on the Gen 7's is much longer, long enough to make me nervous that the Firewall bricked itself as I wait up to 10 minutes for the upgrade to finish. This is particularly annoying since I have to manage 30+ of these across multiple customers, so on 'Critical Patch Night' like a few days ago a few extra minutes per Firewall adds a lot to my overtime sheet.

Designing the interface to only work for 1080p resolution is a baffling decision. In the real world we don't have 1080p monitors with us when were sitting on the floor of a random server room with a tiny laptop, or remoted into customers with a VPN or RDP sessions. I find myself constantly needing to scroll up and down on the menus and the scroll bar for the left menu is tiny and the same color as the background so it's nearly impossible to tell it's there let alone click and drag it. I'm constantly having to switch between CTRL+ and CTRL- to zoom and unzoom my browser to be able to see all the buttons. I suggest you give your UI designers a 15" laptop and tell them to setup a Firewall from scratch, within 10 minutes they'll get so frustrated I'm sure they'll redesign this thing.

To add to that the save and add buttons are often at the bottom of a page and therefore cutoff on a low resolution monitor so you can't see it or click on it. I keep refreshing the page because I think the button hasn't loaded, then I remember I have to scroll down because my resolution is too low to display it properly.

*It looks like this has been fixed in the last update, as the add buttons dock at the bottom of the screen now instead of being cutoff, so that's an improvement!

The edit buttons (in the Interface page in particular) are hidden unless you mouse over them for reasons I don't understand. Why would you hide something as important as a doorknob on a door? Just make the edit button visible all the time so you don't have to hunt and peck with the mouse to find it all the time. 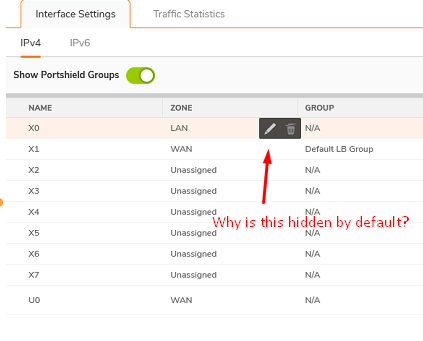 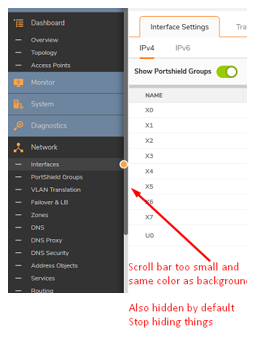 In general I'm pretty happy with the new version, teething problems with early Firmware aside. Just a few gripes with the interface, hopefully you'll take the constructive criticism for what it is and improve the UI.